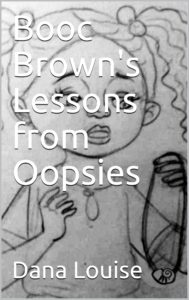 Booc peered over from behind the washing machine door. Her eyes widened, and she held a pink sock in front of her face. “Oopsie, Mom! The white clothes turned pink!”

Mrs. Brown walked to the washer and pulled out what were once white towels, tee shirts, and socks. Now they were all cotton candy pink. At the bottom of the washer, Mrs. Brown found Mr. Brown’s red tee shirt. “Ah ha!” said Mrs. Brown. “Booc, did you put this in the washer?”

“Yes, oopsie,” said Mrs. Brown. “You can’t put colored clothes in the white laundry. I didn’t see you do this. Now all the clothes are pink!”

“It’s not your fault,” said Mrs. Brown. “You didn’t know. The next time, never put red or color clothes with the whites.”  Mrs. Brown placed Booc’s once white shirt in the dryer. “Looks like you get to wear a cotton candy pink shirt to school today,” said Mrs. Brown.

Booc’s frown turned upside down, and she smiled brightly. Pink was her favorite color!

Mrs. Brown grabbed a chair near the kitchen counter. “Booc, come watch me make your breakfast.”

“What are you making?” asked Booc Brown.

“An omelet. Watch the egg in the bottom of the pan and tell me when it starts to look cooked. I’m going to grab some mushrooms.”

Booc saw a bubble come up, grabbed the spatula, and poked at it. She decided to help by moving the liquid egg around with the spatula. Oopsie! Booc thought to herself. This looks like scrambled eggs.

Mrs. Brown peered over at her and walked back to the stove. “Little Miss Booc Brown, what’s that frown all about?”

“Yes, oopsie,” said Mrs. Brown as she grabbed the pan. “You’re not supposed to stir the eggs to make an omelet. Your father wanted an omelet for breakfast, and now we’re having scrambled eggs.”

“It’s not your fault,” said Mrs. Brown. “You didn’t know. The next time, never stir an omelet.”

Booc’s frown turned upside down, and she smiled brightly. She didn’t like omelets because her mom put mushrooms in them. Scrambled eggs with catsup was Booc’s favorite!

After breakfast, Mrs. Brown dropped Booc off at school. Booc was wearing her cotton candy pink shirt, matching bows, and pig tails as she walked into class.

Booc’s teacher, Mrs. Upright, announced that the class would be performing A Mermaid Tale for the school play.

Drewann raised her hand. “Mrs. Upright, can I play the Mermaid?”

Abog yelled, “I want to play the King!”

Booc Brown became restless in her chair. She wanted to be the Mermaid, too!

“Settle down class,” said Mrs. Upright. “Every student will read for each role, and I will make a decision by the end of the day.”

Later that afternoon, Booc read for the part of the Lobster, Flounder Fish, and Mermaid.

Mrs. Upright looked around the class. “Booc, will you please come read the part of the Octopus Witch?”

Drewann had just finished reading for the part of the Mermaid and smirked at Booc.

Booc’s face began to feel hot, “I don’t want to play the Octopus Witch, Mrs. Upright. I’d like to be the Mermaid,” said Booc.

No girl in the class wanted to play the Octopus Witch. Booc’s heart was set on playing the Mermaid. She felt frustrated as she grabbed the script and read the lines. As she peered over at Drewann, Booc yelled, “Now sing!”

“Excellent!” said Mrs. Upright. “Booc Brown, you just won the role of the Octopus Witch. Drewann, you will play the Mermaid. Abog, the King, Caeg will play the Prince, Kaia, the Lobster, Isla, the Flounder, Reo and Liam will play the Witch’s eels.

Booc Brown ran over to Mrs. Upright, and her eyes held back tears.

“Mrs. Upright, I don’t want to be the Octopus Witch,” said Booc Brown.

“Booc, it’s only a play. Just have fun with it! Look on the bright side. You’re the only one who gets to wear the shell necklace,” said Mrs. Upright as she placed the necklace around Booc’s neck.

Booc’s frown turned upside down, and she smiled brightly.

“I want you to place the shell necklace on backwards,” said Mrs. Upright. “When you finish your lines and say, ‘Now your voice belongs to me.’ You need to reach behind your back and pull the shell to the front of you.”

Booc still wasn’t thrilled about having the role of the Octopus Witch but remembered that her mother told her she should be a good sport. “Okay, Mrs. Upright,” Booc responded.

Over the next few weeks, Booc Brown practiced her lines after school with her classmate Abog, who lived in the court across the street from Booc’s house.

“King Tutti! How good it is to see you.” said Booc Brown.

“Booc, time to come inside for dinner,” yelled Mrs. Brown.

The next morning while driving Booc to school, Mrs. Brown stared at Booc in the rear view mirror. “Little Miss Booc Brown, what’s that frown all about? Aren’t you excited about your play? I can’t wait to see it!”

“What if I make a mistake and mess up? What if I forget my lines?” said Booc.

Mrs. Brown stopped the car in front of the school. “You’ll be great! Remember when you didn’t know that you shouldn’t wash a red tee shirt with white laundry? Or when you stirred the omelet by accident?”

Booc Brown’s frown turned upside down, and she smiled brightly.

“You learned from those mistakes. The cotton candy pink shirt is now your favorite. You may have made a mistake by stirring an omelet, but the outcome wasn’t as terrible as you thought. You accidentally made your favorite breakfast, Scrambled eggs,” said Mrs. Brown.

Booc smiled as she opened the car door wearing her cotton candy pink shirt. “Yes, Mom, I learned from those situations, and if I make a mistake, it may not turn out to be too terrible.”

Mrs. Brown got out of the car and hugged Booc goodbye. “Have a good day. Everything will be okay!”

Everything did go great that day, until the first dress rehearsal that morning. Booc had convinced the Mermaid to sing and release her voice.

“Ha ha ha! Now your voice belongs to me!” yelled Booc Brown as she grabbed behind her neck for the shell necklace. The lights were shining brightly on Booc’s face. She could see a few people staring from the auditorium. Booc grew nervous as she couldn’t locate the necklace. She tried several attempts and finally cried out, “Oopsie! I forgot my necklace!”

Her classmates giggled, and Mrs. Upright walked over with another necklace that had a larger shell.

“Here. Maybe you need a larger shell necklace so you can grab it easier,” said Mrs. Upright.

Booc’s face felt on fire. She was embarrassed and hoped that the larger shell would correct the problem.

Later that afternoon, the class was to perform the play in front of the entire school. Booc was even more nervous now because of the mistake she had made during the dress rehearsal. The auditorium was completely packed with students.

As Booc’s first couple of scenes passed, she began to feel more confident.

“Ha ha ha! Now your voice belongs to me!” yelled Booc Brown as she grabbed behind her neck for her shell necklace. The lights were shining brightly on Booc’s face. She could see all the students staring at her, and she began to sweat. Once again, Booc grew nervous as she couldn’t locate the necklace. She tried several attempts and finally feeling defeated, looked over at the side of the stage where Mrs. Upright stood and cried out, “Oopsie! I forgot my necklace!”

Mrs. Upright placed her hand on her forehead in disappointment. The stage was silent, and after a long pause, Drewann moved forward with her next lines. After the scene was over, Booc walked off the stage, and Mrs. Upright walked towards her.

“I’m an Octopus, Mrs. Upright. I don’t have any pockets,” said Booc Brown.

“Okay, we’ll need to practice.” Mrs. Upright held Booc’s hand to show her how to pull the necklace forward. They practiced several times before school was let out for the day.

“Practice a bit more before the show this evening. Don’t worry. You’ll get it right this time,” said Mrs. Upright.

That evening, the car was packed. The whole family piled in, and Grandma even showed up to see Booc’s play.

Mrs. Brown looked over at Booc. “Little Miss Booc Brown, what’s that frown all about?”

“I keep making mistakes! I can’t reach my shell necklace, and I don’t want to mess up again,” said Booc.

“You practiced before and after dinner. I think you’re ready. You will do great. Don’t be nervous. We can’t wait to see your play. Look, even Grandma showed up!” said Mrs. Brown.

Booc’s frown turned upside down, and she smiled brightly.

The auditorium smelled like coffee and sweets, which were being served. Booc ran over where Abog and Drewann were standing.

Booc peered over at the crowd and saw her grandma holding a bouquet of flowers. Booc never had anyone bring her flowers before! Booc was filled with excitement as she walked with her classmates to the stage.

The play moved quickly, and for the first few scenes, Booc was doing great until that dreaded scene began.

“Ha ha ha! Now your voice belongs to me!” yelled Booc Brown as she stared at the packed crowd of parents and saw her grandma sitting in the crowd. Booc suddenly froze. After a pause and silence, she lifted her palms up to her sides, giggled nervously, and said, “Oopsie! I somehow forgot my necklace!”

“Awe,” said the crowd as they laughed and applauded.

Booc peered over at the side of the stage and saw Mrs. Upright smiling and applauding.

The crowd cheered as Abog took his cardboard ship and pushed Booc Brown off the stage. Booc wailed and fluttered her arms until the audience heard a loud crash, and Booc was gone.

Caeg ran onto the stage and grabbed Drewann’s hand as her voice came back.

The audience applauded loudly, and the entire class walked onto the stage. Mrs. Upright motioned her fingers, one, two, three, and the class yelled together, “and they lived happily ever after!” The students bowed.

All the lights in the auditorium came on, and the parents stood on their feet, clapping. Booc Brown’s frown turned upside down, and she smiled brightly. Booc learned a great lesson that evening.

Sometimes we learn from our mistakes, and sometimes even our mistakes have a funny way of working out.