A lawn mower hummed in the distance from the city of Apple Hill’s baseball field.

A warm breeze that smelled of fresh cut grass and sunscreen gently dried the sweat off Abner’s forehead as he gripped his baseball bat and positioned himself into a batter’s stance.

Sweat dripped from the team’s pitcher’s, Billy Bullae’s, red eye brow, across his orange freckled face, and down the black tiger stripes that were painted under his eyes. He pulled back his arm, raised his knee, and threw a fast pitch! Abner heard the ball hit the catcher’s glove behind him while he was in midswing!

Abner tilted his head down and dropped his bat. As he walked away, Billy shouted, “Nice job, Ab-Nerd! Your speed will be great when you play with Team Sloth!”

Abner peered over and shouted, “Sloth? What are you talking about?”

The other players started laughing. Abner grabbed his backpack sitting near the fence and swung it over his shoulder. As he slowly walked away, he whispered to himself, “I’m a sloth?”

Abner peered over at Billy and the other players and called out, “Hey! My name’s Abner, not Ab-Nerd, Bullae!”

That afternoon, Abner took the long route home. His mind kept questioning, “I’m a sloth? Sloth?” He felt shame in his heart, and tears filled his eyes until they ran down his face and over his black painted tiger stripes.

Crickets sang in the blackberry bushes, and the sun sank low. Abner knew it was getting late, so he picked up his pace and rushed home. Upon arrival, Abner dashed into the house and headed straight for the bathroom. As he washed his hands, Abner stared into the mirror and paused, startled by his reflection! The tiger stripes had smeared because of his tears, and he had large black circles around his eyes.

Abner looked into the mirror as Billy’s taunting repeated in his mind. “Nice job, Ab-Nerd! Your speed will be great when you play with Team Sloth!” Abner intently looked at his reflection and whispered to himself, “I am a sloth.” He looked up and his reflection looked like one-half Abner and one-half sloth.

Abner’s little brother startled him when he banged on the bathroom door. “Hey, Abner. Mom said dinner’s ready. Last one to the table’s a sloth!”

“Sloth!” Abner opened the door and charged behind his little brother Gabe, who was one foot shorter than him. Gabe ran ahead, across the house, and towards the dining room. Out of desperation, Abner grabbed Gabe’s shirt to stop and tackle him in the hall. Gabe twisted and wrestled with Abner until Abner tripped on his own foot. As he collapsed, Abner’s grip released Gabe’s shirt, and Gabe dashed on!

Defeated, Abner put his face in his hands and quietly said to himself, “I am a sloth.” Slowly, he stood up and walked to the dining room where his victorious brother welcomed him with a grin “I won!” proclaimed Gabe. “Looks like you’re the sloth!”

Abner now felt ever more defeated. He sat quietly and ate dinner with his Mom, Dad, Gabe, Uncle T, and his talking parakeet.

“ERH! I’m a pretty bird,” the parakeet sounded off.

Gabe laughed, and Abner bit into his dessert, a chocolate fudge brownie, unamused. The parakeet sat on Uncle T’s shoulder and rapidly fluttered its wings. Uncle T got up and walked the parakeet to the living room and placed it in the cage.

Abner looked up from his plate and saw his reflection in the china cabinet mirror. “Oh, no!” Abner cried out as his fingers touched his face. The chocolate fudge from his brownie smeared around his mouth and matched the black circles from his tiger stripes that formed around his eyes. He now looked exactly like a sloth! 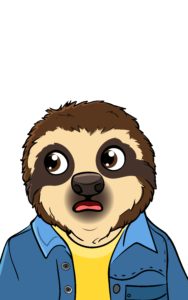 Devastated, Abner shook his head and said, “I am a sloth.”

Abner’s mom looked at him. “Abner, are you okay?”

Abner asked, “Could I please be excused?” When his mom nodded her head in approval, he walked to the living room and laid himself across a futon mat on the floor. Suddenly, he heard, “ERH!”

Startled, Abner looked to his right, where he saw Uncle T’s talking parakeet, staring at Abner from the cage.

Bitterly, Abner peered over at the parakeet and said, “No, you’re no pretty bird. You’re a sloth!”

The parakeet looked intently at Abner and squawked, “ERH! I’m a sloth.”

Shocked by what the parakeet said, Abner started laughing. He laughed so hard his body trembles and shook as tears streamed down his face. Abner leaned in closer to the parakeet’s cage.

Uncomfortable with Abner’s close presence, the parakeet trembled, and it ruffled and expanded the dark feathers around its eyes and mouth.

Abner looked away from the parakeet and then back to the cage. The parakeet looked more like a para-sloth.

Uncle T yelled from the dining room, “What did my bird say? Hey, Abner, don’t teach the parakeet any words it shouldn’t say!”

Abner’s face turned chili pepper red, and his eyes widened. “I’m not, Uncle T,” he replied. “The pretty bird is just fine.” Abner leaned in closer to the cage and with deep concern whispered, “Shh! You’re not a sloth. You’re a pretty bird!”

The parakeet’s feathers shook rapidly again and appeared to look even more like a para-sloth! “ERH! I’m a sloth,” proclaimed the parakeet.

Abner flung his head into his hands in deep frustration. He took a deep breath in and exhaled out and whispered to the parakeet, “I’m a pretty bird. I’m a pretty bird,” as he tugged on his shirt and wiped the sweat from his face. Abner looked up and saw his reflection in the mirror hanging across from him. The black circles around his eyes and the chocolate fudge on his face were gone except for a small black dot on the tip of his nose that made him appear to have a bird’s beak.

Abner put one hand over his nose and stared down at the parakeet. He proclaimed, “I’m a pretty bird!”

Soothed by Abner’s calm voice, the parakeet’s feathers relaxed, and its appearance returned to normal. “ERH! I’m a pretty bird,” proclaimed the parakeet.

Abner smiled with great enthusiasm as he worried he might upset Uncle T. “Good bird!” Abner exclaimed as he jumped up and ran to the bathroom. He locked the door, wiped the tip of his nose with a washcloth, and stared at his reflection in the mirror.

As Abner stared at himself in the mirror about to toss the washcloth in the bathroom hamper, he saw his bicep bulge. “Whoa!” proclaimed Abner. He turned on the water faucet and gently tapped water on his head and combed his hair. He no longer looked like a sloth. In fact, Abner felt handsome and strong!

He smiled at his reflection and said, “I’m Abner, and I’m lightning fast!”

Knock, Knock, Knock! “Hey, Abner. Mom wants you to come and say goodbye to Uncle T.  Last one to the front door’s a sloth!” shouted Gabe.

Abner jumped towards the door, swung it open and chased Gabe across the house. Abner’s lightning fast legs quickly came up behind Gabe, and he pulled him out of his way. Victoriously, Abner reached the front door before his little brother.

Abner hugged his Uncle T and said goodbye along with his family. Just as the front door was about to close, Uncle T’s parakeet squawk, “ERH! I’m a sloth.”

Abner looked over at his parents. “ERH! I’m in trouble.”

The next day at school, Abner showed up for baseball practice. As he walked up to the rest of the team, Billy said, “Hey, everyone, Ab-Nerd showed up!”

Abner grabbed a bat and walked to the plate. “It’s Abner, not Ab-Nerd, Bullae!”

Billy laughed as he got into pitching position. “Are you going to show everyone you’re ready to join Team Sloth with that sloth slow speed?”

Abner gripped his bat and got in a batter’s stance. He whispered to himself, “I’m lightning fast.”

Billy pulled his arm back, lifted his knee, and pitched the ball at Abner.

In great amazement Abner heard Smack! As he peered up, Billy’s mouth was wide open in awe Abner hit the ball right out of the park!